Step Right up for the Puppet Show! 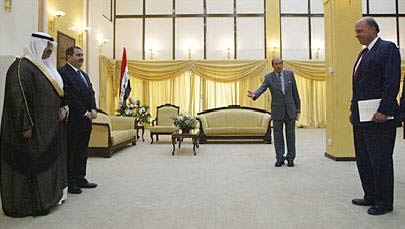 That's Doctor Dylan to you... 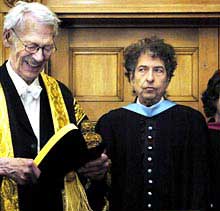 U.S. Relents - GIs can face War Tribunal
How shady is it that we wanted immunity from this in the first place?
- posted by staff @ 11:07 AM

Iran in the Negative Spotlight of late!
SpinControl.org has noticed that Iran has been copping some negative headlines lately: British boats seized; non-compliance with IAEA (despite their mis-representations of fact); etc.. AND it appears to us that this is similar to the types of stories leaked to the press preceding numerous justifications for military action in the past 25 year history of the U.S.. CONSEQUENTLY, We wouldn't be surprised if there was suddenly justification for "war" with Iran (axis of evil includee) sometime between now and November, say, election time.
- posted by staff @ 12:02 AM
Wednesday, June 23, 2004

Wolffy says U.S. underestimated insurgency
Well Duh! Otherwise we wouldn't be in this mess right? How much taxpayer money is this monkey paid to come up with these revelations?
- posted by staff @ 12:00 AM
Tuesday, June 22, 2004 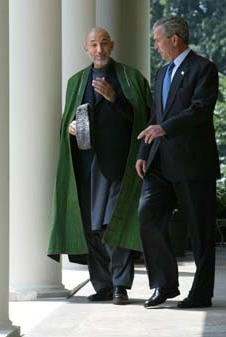 1. Install Puppet that appears "safe" to the American public: not too Arab looking, pretty white, well spoken, good English.
2. Adorn him in tasteful Armani Suits and Accessories.
3. Surround him with bodyguards.
4. Give him whatever he wants so that he's fat and happy.
5. Parade him in front of congress with a well written speech praising the administration.
6. Trot him out for Meet the Press with pre-approved, scripted, question-answer session.
7. Have him continually gush about how much we've helped his country and how successful everything has been in Afghanistan, despite the fact that Afghanistan is now overrun with druglords, warlords, etc..
8. Photograph him often with heads of state while he's making intelligent looking gesticulations.
- posted by staff @ 12:15 PM
Tuesday, June 15, 2004

UN calls for truth on Iran's Atomic Program
Whaaaaa! Tired of games and manipulation, the UN is pleading with Iran to be forthright about their Nuclear Program.

Anti-American sentiment growing among Kurds
A. It's about time. We've screwed them repeatedly.

"Bin Laden will be found", and I need some soldiers and some money!
The Puppet wagging the Puppeteer. Karzai, whose Armani look is funded by our tax dollars, wants more U.S. and NATO troops. Perhaps Bin Laden will pop-up in Afghanistan just prior to election time?
- posted by staff @ 12:43 PM

Not so fast Georgy Boy!
Though it appeared that Jacques Chirac and George W. Bush were lovey-dovey after their kiss and make-up sessions last week, Chirac was quick to criticize Bush for pushing a NATO agenda in Iraq and spoke out at the G8 summit with "Democracy is not a method, it's a culture". Good for you Chirac, don't let Bush and lap-dog Tony Blair steamroll the rest of the free world!
- posted by staff @ 11:36 AM

Like the logo, recent actions by the UN seemingly brown-nosing the US policies in Iraq are really only symbolic, due to one key provision on the recent resolution. That provision is the following: Iraqis do not have the authority to veto U.S.-led military operations. This provision makes all of the other provisions in the recent "resolution" somewhat meaningless.
- posted by staff @ 11:23 AM 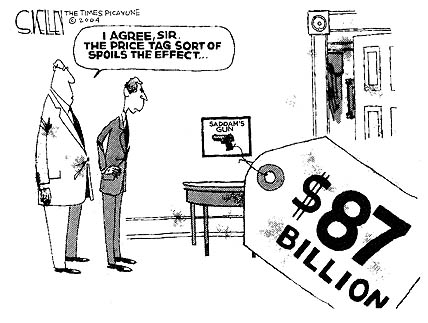 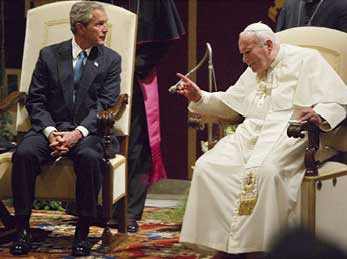 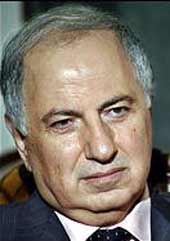 FBI Seeks source of leak on Iran Code.
What a mess. Is Chalabi just a Scapegoat? Did the U.S. foolishly give this guy Carte Blanche? Obviously U.S. intellignece people once again had a major lapse of intelligence.
- posted by staff @ 10:02 PM

"These are not America's puppets"
Condolezza Rice's proclamation that the new Iraqi President and newly elected governing pawns are not puppets sure does beg a lot of questions...

Non U.S. backed President selected for Interim Government in Iraq!
A snag in the Puppet Show! Let's see if he lives until the end of the month! Doubtful!
- posted by staff @ 11:35 PM
Saturday, May 29, 2004

Smells like Shiite!
U.S. installs new puppet to be premier, pre-empting the UN Envoy who has been working on this process for the past three weeks and who was supposed to be in charge of this selection.
- posted by staff @ 3:30 PM
Thursday, May 27, 2004

America's Credibility in Iraq hanging by a thread!
Only 7% of Iraqis vew U.S. as a Liberator according to a new public opion poll conducted for the U.S. authority in Baghdad. 88% view the U.S. as "occupiers". So why are we pissing away all this cash on them?
- posted by staff @ 2:52 PM

454 Prisoners released from Abu Ghraib on Friday
Same comment as the previous release - Doesn't buy a lot of PR at this point and now you've [potentially] released a bunch of crooks and troublemakers, possibly anti-U.S. fighters. Dumb.
- posted by staff @ 12:44 PM
Saturday, May 15, 2004

Shrine damaged in Holy City prompting cries of revenge on Americans
What a no win situation - the "bad guys" hole up in sacred mosques used as armorys, we go after them, and the whole world of Islam blames us for trashing their mosques.
- posted by staff @ 9:41 AM

300 Iraqis freed from Abu Ghraib
In another lame attempt to quell the fallout from the prison scandal, the administration(?) freed hundreds of prisoners from the infamous Abu Ghraib prison. Is this a good idea? It's too late for PR and what about those that were allegedly in this prison for a reason, such as bombing our troops, destabilizing an area, killing our forces? So, they were "bad" enough to warrant imprisonment, and now they're suddenly not a threat? Who's running this mess? Probably a PR firm, somewhere in D.C..
- posted by staff @ 9:33 AM
Friday, May 14, 2004

The UGLIEST American. Ever. Period! 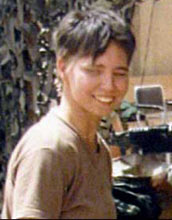 Rumsfeld makes a surprise visit to Iraq
In a desperate PR attempt to save face and his job, Donald made a "surprise" visit to the troops in Iraq amidst a shit-storm of controversy here in the states. Among the myriad PR stunts Donald indulged in, the most foolish was his attempt to portray "the common man" by engaging in a question-answer session with the troops in Baghdad. Donald even stated "how much more 'fun' being questioned by U.S. troops in Baghdad was going to be than critics in Washington" - oblivious to what was to follow - a grilling which included questions regarding when they would get improved vests and better armor for their Humvees?, whether the military was going to pay for their full airfare home?, why their medical coverage didn't cover their families conditions?, etc...

A classically hilarious Rumsfeld quote from the outing was the following: "The world will see how a free system, a democratic system functions and operates transparently with no cover-up".

(trying to regain composure) All I can say is that we are living in interesting times...

Another silly utterance was Rumsfeld declaring flatly "I'm a survivor". Hmmmmm. Not by democratic choice, I assure you that.

Again (trying to regain composure) All I can say is that we are living in interesting times... 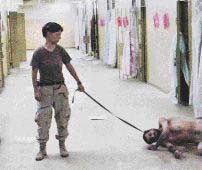 Whoops!
Shit's gonna hit the fan over the PRISONER ABUSE SCANDAL. Fasten your seatbelts and enjoy the ride!
- posted by staff @ 8:54 AM