High Rise Fire Scandal
We're been hearing everything and nothing about that boring high rise fire that killed 6 for many months now and there have been at least three high-profile and expensive investigations into the cause, but there still appear to be a lot of unexplained mysteries about this fire. Can't forensic science give us the facts? Smells like cover-ups!
- posted by staff @ 3:34 PM

Useless Lawmakers getting 2.7% Raises
They can't manage a frigging thing and can't agree on a budget, but they sure can give themselves more money!
- posted by staff @ 3:32 PM

Crime Pays! Bank One Settles for $90 Million
Yes, but how much money did they make? Slimey Big Bank, Bank One is charged with allowing hedge fund Canary Partners LLC to make improper trades in it's mutual funds at the expense of individual investors - little guys like you and I. Additionally, the SEC imposed a $100,000 fine on Mark Beeson, who ran the funds. He probably pocketed a few million in the process. Crime Pays!
- posted by staff @ 3:25 PM

We have a good idea!
Fire Madigan, Jones, Blagojevich, etc.. and start from scratch. Get rid of the whole useless, expensive bunch. We can no longer stomach their childish games, budget bickering, stonewalling, finger pointing, etc.. and to think, they're all part of the same party!!!

You Don't Know JACK!
Cheese wad Ryan Drops out, too bad it was for all the wrong reasons.

And due to popular demand, here's another picture of his ex-wife: 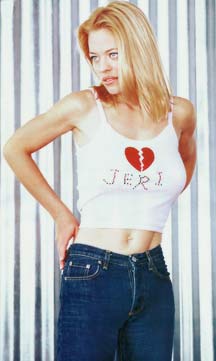 GOP leaders say they felt misled on Ryan File
Why? He said it would be embarassing. He made it sound bad, and it really is much ado about nothing! Who cares? We're more concerned that this guy is just a FREAK! If this guy isn't scary looking, who is? 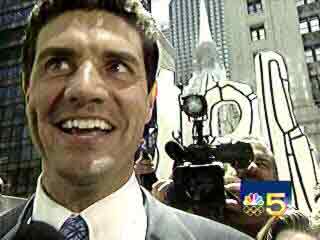 Tribune calls Ryan Divorce disclosures a "Bombshell"
The only "bombshell" we see is Ryan's ex-wife Jeri: 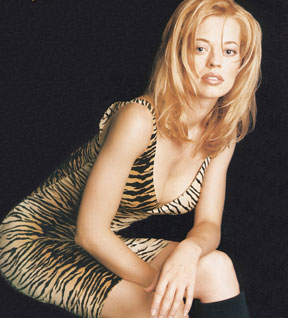 And frankly, even though we can't stand Ryan for a number of other reasons, we can't blame ANYONE who has a spouse like this, for wanting to parade her around the world's sex clubs!

Foot in Mouth #48731
The EPA has determined that Milwaukee is NOT responsible for the sewer water contaminating Chicago area beaches, contrary to irresponsible and stupid comments made by Mayor Daley last week accusing "Cheesehead sewer water" for the recent beach closings.
- posted by staff @ 11:26 PM
Friday, June 18, 2004

The Suspense is KILLING Us!
What's in those Jack Ryan divorce papers? We're gonna have to wait until the 29th to find out!

Jack claims that it's some embarrassing stuff. Are we talking Marv Albert type stuff?
- posted by staff @ 10:32 AM

Cubs Win 6 Straight, Sweep Stros Despite Roster Woes!
Finally showing some fight and with half the starters out of the lineup.
- posted by staff @ 8:25 AM
Thursday, June 17, 2004

Vicente Fox is in town to press for Visas, Licenses
We've got a better idea - why don't you fix your own frigging country and corrupt politics so that people will want to stay in their native Mexico instead of coming here in the first place!
- posted by staff @ 11:35 AM
Wednesday, June 16, 2004

Congrats to Ramon Martinez on his first HR of the year!

Sun-Times discloses significantly overstated circulation!
Did we happen to mention that SpinControl.org is getting 100,000 hits per day?
- posted by staff @ 12:08 PM

Naperville Librarians Rock!
In defiance of local police and possibly the Patriot Act, a Naperville Library is refusing to sacrifice a patron's privacy. We're glad to see someone out there with a backbone!

Business As Usual... BE MAD AS HELL ABOUT THIS!!!
SBC. Ahhh. SBC. Lobbying $$$ payoff big as SBC gets their way once again and will raise wholesale rates for rival companies by 30%. Ed Hurley, bought off chairman of the Illinois Commerce Commision, appearently out of touch with reality or so intoxicated on SBC Lobby Money, commented ridiculously that "there's no reason to expect the wholesale price hike will lead to higher retail rates for consumers"!??!?!? Oh, of course not. Utilities NEVER pass their cost increases on to consumers!
- posted by staff @ 11:10 AM

He doesn't know Nothin' about Anything!
Daley. City Hall Payoffs.
- posted by staff @ 11:05 AM

What a Letdown II
Cubs Ace Mark Prior - whom many have hoped would save the season - choked on his second outing yesterday, walking many and allowing grand slam. Ug!
- posted by staff @ 11:00 AM

What a Letdown!
Though State budget shortfalls are at record highs, Gov. Rod Blagojevich was trying to push through his own pork project of paying for a new state-of-the-art trapshooting range in Southern Illinois. Ug! We really hoped that Blago would be different, but he's just more of the same.
- posted by staff @ 10:54 AM

Amazing!
State legislators rejected their own pay hikes in the face of bad PR and under scrutiny by the media. Despite inability to balance the state budget and facing an unprecedented fiscal crisis, these greedy pigs were ready to give themselves 10% increases in pay! We wonder what sorts of pay increases the lowly state workers have gotten over the past couple of years? That is, those who haven't been laid-off.
- posted by staff @ 10:49 AM
Tuesday, June 08, 2004

Enough Already!
The Illinois Gaming Board is so crooked and so useless that they should all be fired - WITHOUT PARACHUTES - and as soon as humanly possible. These morons couldn't shoot fish in a bucket.
- posted by staff @ 10:47 AM
Monday, June 07, 2004

Jack Ryan has something to hide!
Must have been an ugly divorce... Jack Ryan hired a full time goon to stalk/follow Illinois Senate opponet Barack Obama and to continuously videotape, photograph and generally harass him. If you've seen his advertisements and his Bio then you can sense what this arrogant fuck is all about - it ain't pretty. Neither is his campaign.

Blagojevich, Madigan and Jones - it's all about THEM, NOT US!
Friggin' politicians! Playing their games of ego and power, screwing us, the people.

Cop Cover-Up - Business as Usual...
A fed lawsuit alleges that two Chicago cops falsely claimed to be pursuing a man with a gun to conceal wreckless driving that resulted in their unmarked car striking and injuring an 8 year old boy and his niece last month. The boy died a day later.
- posted by staff @ 9:18 PM
Sunday, May 30, 2004

State to Free 18th Person Who was on Death Row!
Gordon "Randy" Steidl, another innocent who has spent many years of his life wrongly imprisoned is just the latest to be freed, more are pending.

This says all you need to know about corruption here in Illinois.

Having alienated EVERYONE in Springfield and now Chicago, Rodney's really got his work cut out for him.

At least his corrupt predecessors maintained the "illusion" of being effective.
- posted by staff @ 2:15 PM
Thursday, May 27, 2004

Dick's Brother William Daley steps down from Sleazy post at SBC.
Does this mean he's going to run the Kerry Campaign? If so, maybe he'll be as successful as he was running Gore's campaign - he captured a majority of the popular vote - oops, that's not always good enough.
- posted by staff @ 10:01 AM
Friday, May 14, 2004

Rod and Dick set for a duel!
Phallic frontmen 'Rod' Blagojevich and Richard 'Dick' Daley are looking to duke it out on whether or not to host a CASINO in downtown Chicago. This could be interesting.

Poor Rod keeps getting beaten up for having great ideas (drugs from Canada, School Reform) and the staff here at Spin Control must agree, the lackeys that would gravitate to a casino in downtown Chicago would undermine everything Dick his-self has done to clean up the city. Not a good call Dick! Spin Control backs Rod on this one!
- posted by staff @ 4:58 PM
Saturday, May 08, 2004

Murder in Wrigleyville?
Bummer! Wrigley has always been safe fun - let's be sure there isn't a new element attending games and causing trouble - UG!

Boring Week in Chicago Politics!
Not much scandalous happened this week in Chicago nor Illinois. The hype point was probably Segal's Madame disclosing his big spending on whores, etc.. - big deal. Today's story of non interest is Senator Dick Durbin's calling for Rummy's resignation - So?
- posted by staff @ 1:02 PM
Friday, May 07, 2004

The Bats are Hot - Zam Zam Tosses a 2 Hit Shutout
Cubbies got 11 runs and Zambrano notched his fourth, looks like things are back in control...
- posted by staff @ 9:37 PM

Honest Abe goes to 5-1
Matty pitched another great game yesterday, bumping his season to a team high 5-1. Offense helped out for a change
- posted by staff @ 10:53 AM